Knocking at the Door of Community Philanthropy 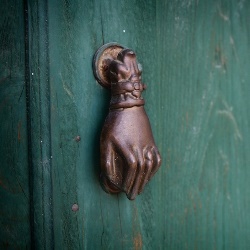 I just spotted this new report - The Case for Community Philanthropy: How the Practice Builds Local Assets, Capacity, and Trust - and Why It Matters.  This is a follow up to Barry Knight's February 2012 report, The Value of Community Philanthropy: Results of a Consultation.  Spotting this new report was funny since I very recently pulled out Barry's report again to take a look - and was once more struck by the congruence between what we describe in the United States as grassroots grantmaking and what Barry describes as community philanthropy.  That's why the map that appears just inside the front cover of this new report was particularly interesting to me.  Under it's banner - A Local Practice, Spreading Globally - is a map of the world that shows hot spots for community philanthropy. With North America conspicuously missing.

Yes, yes - I know.  The focus of the conversations that have resulted in these reports has been elsewhere.  It is truly exciting to see the energy and new forms that are springing up EVERYWHERE that share the characteristics of what is now being described as community philanthropy.  But what a shame that the true scale of this global movement isn't being represented in these conversations.

If you have read my blog over time, you know how much I fritz over language - not because I especially love fritzing with language, but because I have the seen the power of language to limit thinking.  You have probably gathered that I don't particularly love the term "grassroots grantmaking" and have come to accept using it as a practical step forward out of the boxes that "neighborhood small grants" had built around the work that I write about in this blog.

So I'm wondering if it's language that's once again limiting our thinking about the full scope and energy of this growing community philanthropy movement - by not realizing the parallel world here in North America that in some circles identifies as grassroots grantmaking.

With Barry's definition in mind - especially the "using own money and assets" characteristic as an essential component - I can see how grassroots grantmaking could be overlooked as a core mechanism of community philanthropy.  After all, the very word "grant" implies that people are receiving money and not using their own money and assets, doesn't it?  It suggests that there is a benevolent grantor - with money that comes from donors or private wealth - and that the collecting and distributing sides of the grantmaking equation are separate.  And then there's the problem with grassroots - often a code word for "marginalized", "poor", "disadvantaged" or everyday (not individually important) people.  So put together, grassroots grantmaking could be construed to mean powerless people who are receiving money from powerful (wealthy) people and organizations so that they can learn that they too can be powerful.

But it's not that.  If it was, I wouldn't be in this seat writing this blog.  Instead what I see is a flexible, practical, powerful vehicle that more and more people and organizations are discovering as a way to connect monetary giving with the first investors in a community - the people who experience the community every day and are putting their ideas, their time, their talents, their relationships, their personal reputations AND their money on the line for community benefit.  It puts money in the mix as just one important ingredient, casting aside two very naive assumptions - 1) that money doesn't matter and 2) that there is a direct correlation between money and impact.  Using Barry's words, it does this:


"Having local people involved as donors (I would use the word  first investors) us a game-changer in efforts to build civil society and enhances the prospects of sustainability of external funding when the program ceases.  If successful, community philanthropy also leads to more lasting, entrenched outcomes by increasing local ownership and local accountability."

The problem with failing to recognize the growing grassroots grantmaking sentiment in the United States and Canada as part of this international movement  - recognizing it in spirit and not as a narrowly defined grantmaking tactic - is that we are missing out on a huge opportunity that has field building implications - missing opportunities to further a shared identity and invigorate learning, and spread the practice.

The latest report ends with a call to action:


"Community philanthropy has proven to be effective and compelling across a variety of geographic and cultural contexts. It is time to help it become a mainstream development strategy........With the practice poised to improve and grow, now is the time to take action."

And some possible questions that should be explored, including:
So with this call to action and these questions (along with the others that are raised in the report), I'm here knocking on the door - not knocking the authors or sponsors of these reports, but knocking on the door for what comes next.  Knock knock, community philanthropy.  It's time to let grassroots grantmaking in and take the next step of making this a global movement.