Friending in the Big Thinking World 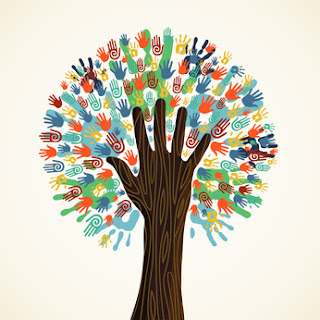 One thing that I have noticed in the big thinking on small grants world is how we sanitize the language of community.  We talk about building community, various types of social capital, individual, organizational and community capacity, social networks, associational groups, grassroots leadership, and community change.  The word we don't use very often is "friend" or anything related like "friendships" or "friendly".

I am experimenting with podcasting as a way to share the conversations with amazing people that I get to have as Executive Director of Grassroots Grantmakers, and am now quite fascinated with how often that word - friend - has been showing up.  Especially when I'm not talking with funders. I'm actually getting a bit obsessed with this.  So much so that when I was listening to NPR this morning about the post-Katrina New Orleans, I began to talk back to the radio when the commentator mentioned the importance of social networks: "Why don't you just say that people with friends are doing better than people who are isolated?"

Mark Hopkins believes so much in the power of friends that he has invited people over to his apartment in Calgary every other Sunday afternoon for FIVE YEARS - just so they can get to know each other.  His "We Should Know Each Other" campaign began with the realization that people in his various social circles didn't know each other, and a curiosity about what would happen if he could help people make connections.  A simple invitation, a few swipes of the dust rag, and some simple refreshments is all is all it took to get this started - and the ripple effect has been tremendous.  So tremendous, that it extends way past Mark at this point.  Friendships, dating relationships, job connections, people helping people out - all that stuff that comes with more social capital - is growing from Mark's simple idea and gift for connecting people.

De'Amon Harges, Broadway United Methodist Church's "Roving Listener", spends his time in Indianapolis listening, watching and appreciating what is already there in the neighborhood around his church, building and nurturing friendships that bring economy, community and mutual delight - weaving together the strands of community that are there waiting for someone with an eye for connecting.

Dave Runyon, co-author of The Art of Neighboring: Building Genuine Relationships Right Outside Your Door, works from a faith-based perspective, trying to make "love your neighbor as yourself" real in a day to day world.  Dave acknowledges how hard it is to get to know neighbors as people.  He talks about the importance of learning (and remembering people's names, and has developed the most ingenious tool - a refrigerator magnet that looks like a tic-tac-toe board with "my house" in the middle" - that he hands out for people to use to help people learn and remember the names of the people who live around them.  Reminding people about the continuum - stranger > acquaintance > friend - he encourages people to be intentional about turning strangers into acquaintances and acquaintances into friends.

Jan Thrope, photo-journalist, author of Inner Visions: Grassroots Stories of Truth and Hope (here's my earlier post about her work), founder of Inner Visions of Cleveland, and wonderful imaginer and possibility thinker, talks about "friending" as a way of investing in people in Cleveland.  When I was talking with Jan, she mentioned times when she and others on the giving side of the equation learned about something that was going on with someone on the receiving side of the equation - something that crossed the line between "business" and "personal" - and jumped in the way friends would do to lend a hand.  She also talked about "friending" coming the other way, and times that people shared their gifts with her - like creating a play around her book and using the play as a platform to share an amazing array of community talents that had previously been invisible.

My conversation with Jan made me think about friending in the big thinking on small grants world.  I thought about the importance of structuring grant processes so that they are friendly - designing out the intimidation factor as much as possible. Tom O'Brien with Cleveland's Neighborhood Connections puts "friendly" at the top of his list for how he wants the small grants experience there to feel for people, and goes so far as to coach grantmaking committee members on how to bring "friendly" into the picture.  This is so important. I love that he does this.

My point of sharing these random stories is to say that it is really powerful if we allow ourselves to connect our personal and professional brains - our right and left brains in the big thinking on small grants world - and remember that when we are using the professional, sanitized words for community connectivity we are talking about what happens when people move down the path from strangers to acquaintances to friends.  We are talking about the "doing together" that generates community gardens, more things for kids to do after school and expressions of local culture like festivals and murals - but most of all, works to help the people who find each other through that idea move along the path from stranger to acquaintance to friend.  We are talking about people around and with people who will provide the moral support needed for people to take on new roles, exercise their personal power and take the risk to get their personal skin in the game.  We are talking about growing friends.

If you have a story that involves intentional "friending" - as a community member or as a funder - I would love to hear about it!  You can share it hear or email me to set a time to talk.