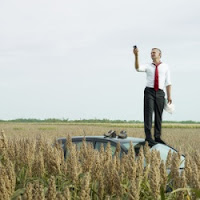 I had a conversation with a small group of great people earlier this week I've had way too often. I was wrapping up a short talk on grassroots grantmaking and the network, Grassroots Grantmakers, when a young man raised his hand to share his story about trying to find someone - anyone - who is interested in what he and his neighbors are doing and could help them get connected to the modest resources they need to work on their next idea. He really identified with my "big thinking on small grants" perspective and was surprised to learn that there are funders out there who actually open their doors to people like her. He asked where he could go in his community to find one of those funders and what he needed to say or do to open the door. I answered him with the what I have to say way too often. In terms of funders who thing big about small grants and are interested in ideas like yours, there's no one at home in your community.

I was thinking about this and the disconnect I see between people with energy, passion and the will do work that could be described as the work of active citizens and place-based funders who have connections, resources and mandate to acknowledge and strengthen the contribution of such work to community vitality and viability when I spotted Rich Harwood's recent blog post about the importance of community anchor institutions. I was thinking about how many people would read Rich's blog and then identify a funding organization as a community anchor institution that felt welcoming, and a place that had the confidence of everyday people to help to spark and lead change, convene and connect others, and focus on the community (rather than programs alone).

While I try to keep my focus on the full part of the glass and the possibilities that the entrepreneurial funders that I know about are creating, I must say that I'm more than a bit perplexed by the few places that grassroots grantmaking is showing up - especially considering that in the United States alone, there are:
And, considering that grassroots grantmaking is a low cost/high return proposition, I just have to ask why more funders are not including grassroots grantmaking in their portfolio of grantmaking strategies.  I've been poking around on that question recently, and have some hunches that range from big boulder obstacles to things that should be easily swept aside - many that I've written about from time to time on this blog and others that I'm still exploring.

Nevertheless, if I had my way, I would be able to say "call here" whenever I'm asked about what funding organization in a particular community is the go-to, big thinking place for groups of everyday people who have skin in the game when it comes to their community. And when people showed up at the door of that funding organization, they would find places where what Rich Hardwood is describing is happening, but they would also find places that feel good - like places of possibility.

So now I'm asking you.  Do you know of a funding organization that meets the criteria that Rich describes as a community anchor institution and, for everyday people, feels like a place of possibility?   If so, please share a story about that place or some thoughts about what makes it stand out for you.  We need more real-live examples of a boulder-breaking funders - an important step in making it easier for all of us to find a grassroots grantmakers in every community.