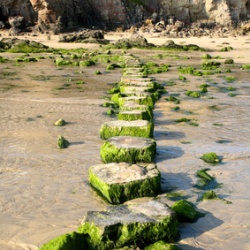 I was in Atlanta recently with a fantastic group of big thinkers, attending Grassroots Grantmakers most recent On the Ground learning gathering.  We were hosted by the Community Foundation for Greater Atlanta and Atlanta's Place-Based Funders, and had the privilege of hearing stories of community change and transformation associated with the work of these funders over the past two decades.  Thank you, Atlanta, for rolling out the red carpet and making us feel at home!

As so often happens at On the Grounds, a theme emerged.  As we heard about work in Atlanta from both the funders' point of view and the community residents' point of view, and as those stories triggered conversations about our "back home experiences", we kept coming back to one thing.  I could call it a common denominator rather than a theme, because a commitment to this one thing seemed to make the difference between projects that worked and those that didn't.  It was "relationships first, results later".

I can spot some eyes rolling out there.  What?  I need to blindly invest in relationships without putting those results outcomes on the table, with timelines and clear expectations?  Is this more about the importance of the "soft work", when I have to justify putting this money on the table to people who are all about results?

Yes, you need to invest in relationship, but there's nothing blind about it. It's the first investment you make on the path to results.

When I think about the twenty year evolution of Grassroots Grantmakers, the network, and grassroots grantmaking, the practice, I think about sparks of "relationships first, results later" insight, based on solid community experience, trying to light a fight in a "results first" world.  I also think about well-intentioned community interventions over those same twenty years - well-orchestrated, professionally-engineered, well-funded initiatives with logic models, benchmarks, and tight timelines that attracted a lot of attention, ramped up expectations, but failed to deliver the community change they promised.  It seems that where grassroots grantmaking shines - in using a relationship-oriented grantmaking approach to invite people - people in relationship with others in their community - into action, is where the big box community change approaches falter.  And where grassroots grantmaking programs often falter - thinking big enough about what groups of active citizens can do - is where the big box approaches get it right.

I heard a story in Atlanta that I've heard dozens of times: Enthusiastic investor with a specific idea, money on the table, and a neighborhood in mind. The problem is that the investor's understanding of the neighborhood came from data, driving around and a few conversations. The idea may be a good idea - one that worked somewhere else and maybe even was designed by community residents somewhere else. So the assumption is that it can be picked up and planted here with the same results.

The other side to this story is the local funder, pulled in as partner because of their community knowledge and proven track record. They know that they are skating on thin ice because their relationships are thin in this particular neighborhood, but give it everything they've got to make this work, hoping that they can make up some relationship building ground in the drive to the results finish line. And you can guess what happens.
I also heard another story that I've heard before - but want to hear again and again.  I heard about the Zeist Foundation's deep and long-term commitment to the Edgewood neighborhood and was impressed by their patient money investments in both things (clinics, housing) and relationships and the understanding of the connection.  I also heard about the Community Foundation for Greater Atlanta's history of adeptly using small grants as a mechanism to build and continually expand their relationships with people beyond the usual suspects in their 23 county region – and using these relationships as the basis for some significant results-generating work with a range of results-oriented partners.  I was moved by the stories that the residents from the Adamsville neighborhood told of their work – how it changed each of them and their community; it was obvious that the value that the residents placed on their relationships with each other was indeed the secret sauce in the results that they achieved.

When you see it, it seems so obvious.  So why do we keep trying to do it the other way?  I’d love some help with this question:  If we can embrace a vision of communities where people are initiators rather than by-standers, where everyone is connected to at least someone, where mutual aid supplants at least some of the services that are now delivered by paid professionals, and people understand how to use their collective voice to make change, how can we miss the importance of investing in relationships as an essential step in achieving the results we want?