The Spice in Your Civic Engagement Salsa 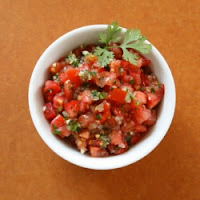 Have some salsa, without the spices. That's like supporting civic engagement without small grants.

Many if not most funders say that they care about resident engagement. Many of these funders do really good jobs of engaging residents without grassroots grantmaking - using everything that comes with the grassroots grantmaking package except small grants. And that's fine. So much more fine than funders or other powerful institutional players who speed past residents because engagement is too messy, too time consuming, too this or too that.

But what I would like to tell these funders who are doing really good jobs of engaging residents without grassroots grantmaking is that their work can come alive in new ways, their investments can do so much more to tip the scale towards community vitality and resilience, if they bring small grants into the picture - in a big thinking way, of course.

The big thinking way of small grants means that we're talking about a lot more than a funding transaction. But we are indeed talking about a funding transaction – a deal that a funder makes with a group that says we believe in your idea, you have something to offer to this picture, and we have confidence that you can deliver. It's also about something that comes with a plan, a timeline, an end-point that signals "take stock (were you able to do what you were trying to do) and reflect (what have we all learned from what happened or didn't happen), and a budget that lays out what money can do and suggests what only people can do that money can't do.

The spice the small grants bring to a funder's civic engagement picture is the spice that most directly propels people with good ideas into action with some intentionality and built-in accountability that keeps them going when life intervenes and sets the stage for the power of learning through doing. That's kind of learning is so much more powerful than learning through just thinking, talking or advising others who are the do-ers. It's like the difference between thinking about the type of parent you will be, how you would handle that unruly child four seats up in the airplane and being in that seat with your child. It's about the difference between issues that other people take on, and the issues that are so personally important, exciting or personal that you're compelled to take them on yourself. It's about moving from supporting actor to center stage as an essential member of the cast.

If you're a funder who is serving up civic engagement salsa without some grassroots grantmaking spiciness, here are some suggestions for a new recipe with some ingredients that are probably already in your cupboard:
I've had it both ways, but I want some spice with my salsa. And you?