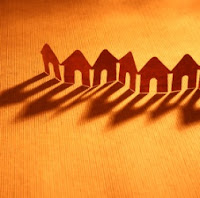 I was in Lawrence, MA last week with a group of 25 people from Denver and Cleveland, two cities where grassroots grantmaking is alive and well.  We were visiting Lawrence Community Works to learn more about LCW's NeighborCircle process - going deeper learning that was sparked by a webinar that Grassroots Grantmakers hosted last fall.

As I sat listening to Bill Traynor and Alma Couverthie talk about LCW's learning journey and the origins of the NeighborCircle practice, I thought back to my own experience in Memphis, designing and managing a grassroots grantmaking program at the community foundation there.

What I think now, and what was reinforced for me when I was in Lawrence, is that we had it exactly wrong.  Bill Traynor talked about LCW's experience with trying to organize neighborhood associations and block clubs, and observed that these efforts quickly resulted in good-intentioned people pouring their energy and time into worrying about who could do what when within the structural framework that had been created, rather than more authentically connecting with neighbors around a shared interest.  LCW did what we didn't have the insight or courage to do - stop doing what we were doing and try something else.

So what else do you try?  Instead of thinking about what type of organization you need, why not think about what conditions you want to create that allow people to come together as people, and not cogs in an organizational wheel?  Why not focus on the ultimate goal - more people who are connected to each other and seeing the resourcefulness in themselves and collective action as the vehicle through which they can give their gifts?  Why not follow the form follows function rule and let the form of the group emerge, rather than dictate the form on the front end?  Why not trust in people instead of business-like constructs?

I don't want to leave this discussion without acknowledging the important role that neighborhood associations and block clubs can play.  I was president of a pretty darn good neighborhood association in my earlier years, and fully appreciate the role that my neighbors and I played via this association in solving some mighty big problems.  But I also know that while we were doing this, there were dozens of less structure laden "groups" of neighbors flying under the radar screen - groups that we generally dismissed because we were "official" and they were not.  I'm simply reminding the big thinkers on small grants everywhere that our love of business models and comfort with professional solutions can creep into our work in insidious ways, encouraging us to set up environments that are counter to what we say we are really about.  Thanks to Lawrence Community Works for sharing their learning journey and helping me move ahead on mine.

So what about you?  What have you learned about the importance of creating the right environment for people to embrace their active citizen, bringing their passions, gifts, and aspirations into community life?  It's your turn to post a comment.