The Problem with Big 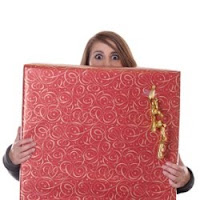 I live in Texas so I know about big. Big is part of this state's culture and identity. We all know that everything is bigger in Texas. And bigger, of course, means better. Right?

And isn't it the biggest package under the Christmas tree that generates the most interest, curiosity and excitement - certain to contain the most extraordinary, outrageous present?
I have been thinking recently about what happens when a funder's small grants work makes it to the big time. Making it to the big time to me means that the funder has worked the kinks out of the small grants process, has built credibility both in the community and inside the funding organization, and is growing roots, establishing the "we begin with residents" way of thinking into the funding organization's DNA. In essence, the funder's small grants work has become a big deal.

This is what we all want. This is what I want in my work with Grassroots Grantmakers. But I'm starting to see something surprising that suggests to me that this "making it to the big time" time can lead a funder down a road that veers away from the values and principles of grassroots grantmaking, leaving behind the very thing that generated the buzz - sort of like what happened to Elvis in the Las Vegas years.

I believe that grassroots grantmaking is a "build on top of" type of strategy and not a build it and move on type of strategy. Because the small grants work that we regard as grassroots grantmaking is intended to invite people to move from dreaming to doing, moving more fully into their active citizen role on their block, in their neighborhood or in their community, it's something that requires solid consistency and – yes, I'll say it – permanence. It something that someone needs to keep doing with an open door and in a mode of possibility thinking.

Because we're talking about everyday people – people who are not professional problem solvers and who are adding "active citizen" to their parent, child, sibling, employee, student, church-member, friend, student to-do list, we can expect that people are in and out of the action as their lives allow. What may be a hot group today with on-fire leaders can be the simmering ember of a group tomorrow because life intervened for the on-fire leaders. Any illusion we may have as funders that we're going to build capacity or leadership today and that this capacity or leadership is going to stay built is just that – an illusion.

If there's not some vehicle for continuing to invite people into the action, continuing to prime the pump of active citizenship, that well that you've drilled with your good small grants work will eventually go dry. That's why I see grassroots grantmaking as a building on strategy – like adding another layer to a layer cake – instead of a moving on strategy.

When small grants work hits the big time, it's time to think about the next layer while continuing to invest in the first layer. What I'm seeing in too many cases, however, is that when small grants programs get hot, the funder remodels the small grants program into a something that is intended to generate bigger results, and moves away from the basics. Without even realizing it, they are undermining the very work that is positioning them for bigger things.

To me, the real potential of small grants program will be realized when they continue on - even if that means that they move to another organization as host - all the while other layers of work are "cooking", using the values of principles of the "we begin with residents" approach to link everyday people with bigger change agendas.

It's occurring to me that the problem with big is that when we are in the presence of big, we often forget about the power of small.

I'm curious if others are seeing this too and what antidote others have found for the seductiveness of big. What language do you use to talk about the power of small when you're in the presence of big? What have you tried to keep priming the pump of active citizenship when your resident-centered work makes it to the big times? Click "comment" below to share your
thoughts.