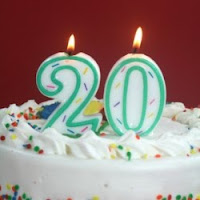 Happy New Year to all big thinkers everywhere!
My first post of the New Year feels like the perfect time to acknowledge Grassroots Grantmakers' 20th anniversary, kick off a year of celebration, and take a slight detour from writing about the practice of grassroots grantmaking to the writing about the network, Grassroots Grantmakers .
Like many things, it's hard to pick the exact date that this network of big thinking funders began. Its roots were in a special program of the Charles Stewart Mott Foundation that go back to the early 1980's and maybe even further. I doubt that the Mott Foundation was intending to launch a network. My understanding is that their intention was to encourage community foundations to reach more deeply in their communities by offering small grants to emerging resident-led groups - block clubs, neighborhood associations and similar groups.
Over the life-span of their program, twenty-three community foundations dipped their toes into the big thinking on small grants water and the seeds of Grassroots Grantmakers were planted. 1991 was the year that the seeds began to sprout, growing first into the the Neighborhood Small Grants Network and evolving into Grassroots Grantmakers. Thus, it is the year that we are using to mark our beginnings.
If you think about Grassroots Grantmakers as a television series now in its third season, and imagine that you are now catching up, popping discs from the first two seasons into your DVD player, here are some season highlights:
Season 1
Season 2
Season 3: What's in Store?

I find that reflecting on the journey is the perfect way to start anew. And 2011 really does feel like a new season - the next chapter - with a solid history of thoughtful work behind us to propel us forward off the starting block. Here are just three snapshots from our 2011 workplan that particularly excite me:
Many thanks to all who have helped this network grow over the years - and welcome to all who are just now becoming connected. Here's to the next season.....