Another Example of Why "Volunteer" Doesn't Work for Me 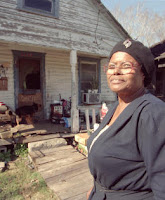 I know I'm venturing into dangerous territory - talking about the word "volunteer" again. I've been thinking about the front page story in yesterday's Houston Chronicle - especially what it suggests about how we regard and reward volunteerism, and what assumptions we make about the roles we play in making our communities work. I'm diving in with some thoughts and an open invitation to others to help me with a question that I believe warrants more exploration.

Yesterday morning I read Mike Tolson's story about Maggie Allen (pictured here) - a woman who had worked 40 hears as barber, supporting herself and her two sons, but who had spent so much time and money helping others that she had no way of paying for her own burial. Sister Maggie died last week at the age of 79, and her niece is now trying to put together enough money for her funeral.

Maggie Allen did it all. She not only gave what her extra time and money she had to others, she founded, financed and ran the Charity of the Three Fishermen to help others who were "down on their luck". She baked pies every Friday and Saturday and sold her pies in front of the Walmart on Sunday to make money for Three Fishermen. And according to her niece, every Sunday there were people lined up to buy her pies. The owner of the barber shop where she worked for forty years said that he called her "The Good Samaritan" - that he had seen her help people she had no relationship with, that if she knew of a person with a problem, she did what she cold to help them, whoever they were. She ran Three Fishermen for years on a $10,000/year annual budget, supported by making pies and time-to-time small donations from local businesses.

I didn't know this Maggie Allen but I have known lots of Maggie Allens. The Memphis neighborhoods that I got to know when I was managing a grassroots grantmaking program there were full of people like Maggie Allen. And I hear stories of other "Sister Allens" from the funders in our Grassroots Grantmakers network - working in marginalized neighborhoods in their cities.

So was Maggie Allen a volunteer? I don't think so. I don't think there was anything "optional" to her about what she did. If connecting and helping wasn't a passion for her - part of her DNA - she would have turned her pie-making expertise into Maggie's Pies instead of forming the Charity of Three Fisherman. She would have focused on her self, her sons and her business and waited for some open space in her life to give back. Or she would have put money away and given back via a bequest after her death. Instead, connecting, helping, and giving of herself were at the core of her every day life - something she couldn't help but do.

Isn't she who we all aspire to be - the good Samaritan? Or do we regard the choices that she made as foolish - that her priorities were wrong or that she didn't think big enough or work smart enough?

In the grassroots grantmaking world, when we meet a Sister Allen, here's what I think/hope happens. We acknowledge what she has done and is doing. We listen for the big dream and look for ways that we can feed her passion instead of starve her passion with hoops and hurdles. We do what we can do to help her begin moving toward that dream. We encourage her to let go of "Three Fisherman" enough to let other people in so that her dream and passion will grow and continue on when she can no longer bake the pies. I think this is what we need to do - but also acknowledge that I might not have a clue about what we can do that really helps because I am not Sister Allen and have not walked in her shoes.

When I hear about funder's interest in encouraging baby boomers who are moving into retirement (and that would be me) to volunteer - older adults who will have time on their hands and expertise to share - I can't help but think of people like Maggie Allen. Yes, I agree that we need to encourage everyone who isn't engaged to be engaged - volunteering, if you want to call it that. But so much emphasis and energy devoted to luring folks like me into the civic-giving space when we're not even seeing much less acknowledging the people who are already there - and have been there when we were doing what middle class people do in their income producing/family raising years - makes me wonder.

Is it that we're not valuing people like Maggie Allen or that we're trapped in our own worlds and really don't know that there are Maggie Allen's in every marginalized neighborhood? And that because of the work that they are doing, more people in these neighborhoods have a friend - that Maggie and her group might be able to contribute in a way that more established non-profit organizations cannot. And that contributing is what made Maggie's own life have meaning.

Here's where I turn to you for help. What do you think? Was Maggie volunteering? If not, how can we connect the impulse and experience of the Maggie Allens of our world with the conversation within philanthropy about civic engagement and volunteerism? Help me, please.