A Refreshing Insight about Grant Size 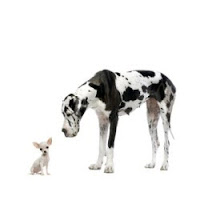 I heard from neighborhood grantmaking team this week at the Battle Creek Community Foundation with a refreshing insight that I want to share.  What they shared made me flash back to a set of comments that I heard almost every meeting from one of the members of the grantmaking committee that I once staffed:

"What? Most of these proposals are for $5,000.  This happens every grant round.  It can't be that everyone needs $5,000. These budgets must be padded. I move that we reject every proposal that comes in for $5,000 - that's an obvious sign that whoever wrote the proposal didn't do their homework on the budget and we shouldn't fund someone who doesn't do their homework.  Who's going to second my motion?"

Guess what our grant maximum was for that fund?  Yep, you guessed it - $5,000.  Did we ever think that the problem was with us and not the grantseekers?  Nope.  Instead we complained and then in our grantmaking wisdom, pared down budgets to what we thought they should be, as a lesson to the grantseeker about budget padding.

Apparently the same thing was happening in Battle Creek with the community foundation's neighborhood grantmaking - except instead of jumping to conclusions, members of the neighborhood grantmaking there looked at the situation with fresh, curious eyes and a willingness to consider that it might be something that they were doing or not doing that was triggering this reaction.  Refreshing, right?

So they wondered if stating the maximum amount that could be requested - stipulating a grant ceiling - might be a subtle suggestion about how much a group should request.  It's human nature, isn't it - to want the biggest cookie on the plate, to go for the mirror ball prize, to want to come out on top?  So if we say that you can apply for up to $5,000, don't we assume that this should be our goal?

So they started with themselves.  They decided to see what happened if they removed the grant ceiling, stepped up conversations with potential applicants about fleshing out their idea and developing a grant proposal.  They began asking groups to attend a pre-application workshop and offered more coaching to groups.  And what they found is that the average request actually declined - with budgets more in line with the scope and scale of the project that they are intended to support.  Kathy Szenda Wilson, Director of Neighborhood Grantmaking at the Battle Creek Community Foundation, says that this experiment has taught them that removing artificial boundaries allows for much deeper, more meaningful dialogue around what is really necessary, and helps resident-led groups have a better relationship with the investment itself, understanding very well the importance of scope and scale.


Here's what I find refreshing about this story:

Way to go!  This is type of story about money I love to write!