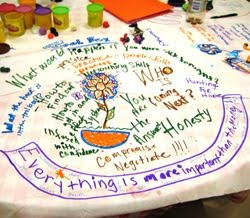 One reason is that two names was just too complicated - professional colleagues know me as Foster, recent friends know me as Richardson, and, believe it or not, I would often stumble around when people asked me my name.  Who should I be to you, or what name have I used before?  So this was as much about making things simpler as it was about a statement of confidence in my marriage - it was about being the same person to everyone I meet, wherever I am.  And I've been surprised about just how much better this feels - getting rid of this seemingly small thing that had complicated my life.

Here's why I'm sharing this.  I've been thinking about the genuine relationships that I experienced at Grassroots Grantmaker's recent "on the ground" in eastern Ohio, and noticing how much angst there seems to be in the funding community about building good relationships with grantees and people at the community level.  Our recent report, Building Resident Power and Capacity for Change, includes a whole chapter focused on building strong relationships with communities - derived from conversations about relationship building at another "on the ground".  And, I've seen numerous other reports and guides abouts about building relationships with grantees, stakeholders and community members.  The people side of the grantmaking business is obviously on our minds.  And I think it has something to do with being who we are wherever we are - about being authentic when it comes to building relationships.

I was struck when I was talking with a seasoned philanthropic colleague about the Ohio "on the ground" experience, and he marveled at how comfortable the conversations were - marveling because half of the people there were not paid grantmaking professionals. Teams from Detroit, Battle Creek, and Cleveland were with us - with these teams composed of neighborhood residents who serve on grantmaking committees, people who staff the grantmaking programs, community organizers and technical assistance providers, and more senior staff with the sponsoring funding organizations.  My colleague said that in his experience, neighborhood residents and others who don't call themselves Program Officers, Vice-Presidents, or Directors often defer or hold-back - at least initially - when they are in conversation with foundation staff.  This didn't happen in Youngstown.  We talked as the equals that we are - equals in working together on a shared goal.

What I said to my colleague is that the conversations that we had in Youngstown reflect the relationship building work that had gone on/is going on in Detroit, Battle Creek and Cleveland.  The neighborhood residents were comfortable because this wasn't the first time they had been at these tables, in these conversations.  They were comfortable because of the real-time relationship building that had occurred over weeks and months of being in conversation with funders and about funding.

And because I know the people that staff the grassroots grantmaking programs for The Skillman Foundation, the Battle Creek Community Foundation, and The Cleveland Foundation, I'll go further to suggest that the real time relationship building that is going on in Detroit, Battle Creek and Cleveland is also about these people.

I look back on my own work with neighborhood grantees and my behavior as a Program Officer or Program VP and see that I had a lot to learn about relationship building.  I know that I would have viewed learning opportunities such as the Ohio "on the ground" as for mostly for me, not really for them.  I would have also expected to see some special "funders-only" break-outs where we got to the real questions.  I would have taken care of the grantees that came along like a mother-hen, but then sought out my funder colleagues in my down-time.  I would have done what I suspect many of us do when we forget who we really are and what we know about building relationships when we're not at work.  Without even realizing what I was doing, I would have been saying "I belong here, you don't" in a hundred subtle ways.

If I had another opportunity, I would do whatever I could to make it simpler - to bring my most authentic self to real time relationship building with grantees and neighborhood residents rather than to try so hard to be a good Program Officer.  I think this would require me to not overly-intellectualize the relationships I was forming and to let my heart come into the picture, with fewer self-imposed rules. This is what I've learned from watching the good work in Detroit, Battle Creek and Cleveland and what can happen if you take relationship-building seriously.