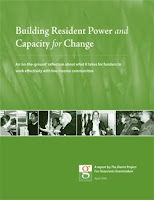 We're releasing a new report this week - Building Resident Power & Capacity for Change. As interested as I am in this topic, it's the subtitle of this report that really interests me.

An "on the ground" reflection of what it takes for funders to work effectively with low income communities.

We began working on the idea for this report when we began plans for the first "on the ground" gathering that Grassroots Grantmakers hosted - using a "non-conference" format with an intentionally small group of people, using the work of one of our member organizations as a platform for learning about a specific topic associated with grassroots grantmaking. We were searching for a face-to-face meeting format that set the stage for deeper conversations, deeper learning and more meaningful networking among peers. Our first "on the ground" was held in Chicago last fall and co-designed with our two Chicago partners, the Woods Fund of Chicago and the Steans Family Foundation. Our topic was building power and capacity for change - using The Woods Fund's work in Chicago's Southside and the Steans Family Foundation's work in the North Lawndale community on Chicago's west side to inform the discussion.

When we began talking about how to capture and continue the learning that began in Chicago, we thought of the "diarist" approach that the Annie E. Casey Foundation had used with Making Connections. We liked the reflective tone of the diarist publications and the focus on learning - sharing successes and struggles of real people doing real work from their own perspectives. These pieces were more than descriptions of what happened or what conversation occurred - they were a different type of report that seemed to match the different type of gathering that we had in mind.

We contacted Tim Saasta, the visionary leader of The Diarist Project and began exploring how the diarist approach might be used to promote the learning that happens at a two-day gathering (rather than learning over time in one of the Making Connections sites). Kristin Senty, diarist for the Des Moines Making Connections work (and now my co-worked with Grassroots Grantmakers) joined us in Chicago to document the gathering via notes and photographs. She then continued the conversation via interviews with six of the people (Consuella Brown from the Woods Fund of Chicago, Alison Janus from the Steans Family Foundation, David Portillo from the Denver Foundation, Jennifer Roller from the Raymond John Wean Foundation, Andy Helmboldt from the Battle Creek Community Foundation, Lisa Leverette from The Prevention Network, who were with us in Chicago, focusing on five of the most pronounced threads running through the Chicago conversation:
Tim Saasta then wove Kristin's documentation, interviews and photographs together into the diarist report that we are now preparing to share.

Segue now to my confession:

I love this report. It is all that I hoped it would be - and more.

This report is deeper and meatier than I thought it would be. And, I must say, I have some mixed feelings about that. Even though everyone who was interviewed has seen the report and okayed quotes that were used, I have been surprised at some of the anxiety I have felt about how it will be received. Will the candor of this report - the digging into questions that many funders don't discuss or only discuss behind closed doors - be a turn off? Will the discussion of challenges scare people away from work that I believe is so vitally important? What will happen when we take the cover off of elephant-in-the-room issues such as how a funder can work effectively with low income communities when there are race-class-culture challenges inside the funding organization itself? Will the commitment and passion that was in the room when we were talking about these questions in Chicago come through when someone who was not there reads this report? Do we really mean it when we say that we want to create a culture of learning, to share the challenges as well as the successes? How does that play in an economic climate when people are in a retreat mode? With a scarcity mentality, do we want to candor about what it takes, or a promise that something will work?

So, in the spirit of reflection that is concert with the diarist approach, I share the report with both my delight in how it was done and how it turned out, and my surprising anxiety about how the reflective spirit of the report will be received. Check it out and let me know what you think.