Are We Starting Over - Again? 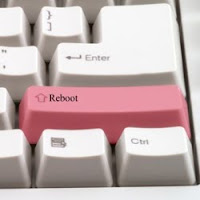 I've noticed something about the grassroots grantmaking world, and my hunch is that it is one of the biggest obstacles to thinking big about small grants.

Yes, I know that changes at the top almost always mean a new chapter for the organization, and that new chapters often come with new energy and enthusiasm for a clearer and more compelling vision. I've seen organizations get stale right before my eyes under the overly watchful eye of a leader who really needs to move on. So I'm not at all about resisting change. What I'm resisting is whatever is contributing to positioning grassroots grantmaking in the part of the organization's memory that is cleared away with a new leader "reboot".

So what might these things be? You know, don't you, that I'm itching to be asked what I think about this question. Since you asked....
What I know is that when grassroots grantmaking is a strategy rather a program, when it's not encapsulated and sitting on the sidelines, when it's physical rather than intellectual, and when there are multiple champions, it becomes more of a way of working than a piece of work to do. And, it's hard-wired into the organization's culture in a way that's still there when a new leader arrives and hits "reboot".

Why am I writing about this now? The easy answer is that I've just seen it happen again. The real answer is that I don't think we talk about this enough. The community side of the work of grassroots grantmaking can be challenging, but it's not brain surgery. Common sense and the collective experience that's at easy reach through Grassroots Grantmaker's community of practice can help a new funder get up to speed quickly.

The hard part of this work is positioning it inside the funding organization. When it is well positioned, it can do what it is designed to do - expand the lens through which place-based funders see their work and bring the people who live in that place into the picture as creators of community vitality rather than recipients of services. When that piece of the work is done well, that's when you see place-based funding that is more passionate, more strategic and more effective. And that's where the work endures.

Do you agree that we don't give enough attention to building capacity INSIDE a funding organization for grassroots grantmaking? And if so, what do you think is getting in our way? Post a comment to join the discussion.