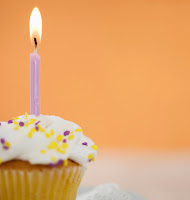 It was this time last year that I launched this Big Thinking on Small Grants blog.

I want to thank all who have signed on, offered encouragement, posted comments, emailed suggestions, and shared how they are using the blog. I wondered if blogging would turn into just another task. What I've found is that yes, sometimes a blog post begins as just another task - but that usually it results in discovery. As someone who works in a virtual environment with colleagues spread across the U.S. and Canada, I've welcomed the blog as an outlet for "talking" to our community about the possibilities and challenges associated with working from a "we begin with residents" perspective. Writing has helped me capture light bulb moments and take note of common stumbling blocks. It has also helped me more clearly see the ebbs and flows in our work. The ebbs have been times when I've had to search for ideas, the flows when the ideas "flowed".

As I begin year two, I'm surprising stuck - might be obvious since this is the first post in about a month, the biggest space between posts in the last year. I'm stuck because it feels like the world changed almost overnight from a place where the goals and values associated with grassroots grantmaking were under-ground. For years, our job was to excavate and elevate - using the relatively small number of visionary funders who were engaged in grassroots grantmaking to help us learn what it means to think big about small grants and how to do a better job of making a case for why more funding should be devoted to supporting ordinary people as problem solvers and contributors to community vitality in their own community.
Now, here are our values and goals in the mainstream. For me, the months before and after President Obama's inauguration have felt like an earthquake that has exposed a call to active citizenship that has been underground for years. In one gigantic rumble, our job of excavating and elevating feels closer to "done" than I every imagined was possible. Evidence of this is everywhere - new interest in community organizing, new people showing up at grant workshops and neighborhood leadership training classes, daily news of people hearing and responding to the call to service, Obama's appointment of a Director of Citizen Participation.
Over the past few weeks, I've gone back and forth between thinking that our job is done to thinking that it - a job that is now exploding with possibilities - has just begun. So let me ask you, blog companion, to help me out.
In the new age that has just dawned, what is the next frontier for those of us who are thinking big about small grants? What can Grassroots Grantmakers, the funders network that is about supporting active citizenship in urban neighborhoods and rural communities, do to make the most of this amazing moment in time? Let's get started on year two together.