Me as a Neighbor 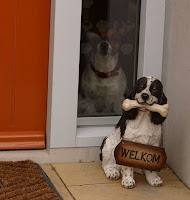 Here I sit in an incredible seat that lets me see work that is going on in dozens of cities to encourage active citizenship as a vehicle for strenghtening neighborhoods and communities. Here I sit in my own house here in Hallettsville, not knowing my own neighbors and, frankly, a bit timid about walking next door or across the street and saying hello.

That's a bit weird, isn't it? Especially since my passion for grassroots grantmaking goes back to my own experience in the Evergreen neighborhood in Memphis - a neighborhood where neighborliness was in the water. Activism was also in the water, since this was a neighborhood that had been fighting for survival for years - cut in half by a swath of land (that was once filled with houses) by an ill-fated interstate highway project. Maybe it was that shared threat and the history of activism that planted those seeds of neighborliness.

My neighborhood here in Hallettsville is struggling in other ways, not nearly as dramatic as being in the path of an interstate highway project, but with some challenges that neighbors pulling together could address. Seems that in this small town, living in town is what you do until you can move out to the country. So a lot of the "in town" folks are here just for a time. And, like many small towns, a lot of people have long-time connections (they are related) - so alot of that discretionary time that people have for friends and neighbors is already largely committed to long-time friends and relatives. The reality of "neighborhood" just isn't too important here. I suspect it's that way in many small towns.

So that's what it's like here. But it was also like that for me in another Memphis neighborhood - one not very far from Evergreen where neighborliness was in the water. This neighborhood had been stable for years, saved from threats like highways. It was stable, beautiful, but, for me, not very welcoming. In that neighborhood, I waved to people but wasn't comfortable showing up at their door. I knew their names but not much about their lives.

So what does this have to do with big thinking on small grants? I'm sharing this to remind funders who are working in the grassroots grantmaking world of just how special the people are who show up at their door - those people who are the ice-breakers in their neighborhoods, those who are seeding "neighborliness" in their own neighborhoods. And when encouragement is given to "get more people involved" as a condition of a grant, to think about just how challenging this might be. For me, getting more people involved would have been simple in one neighborhood - really challenging in another. Important in both cases, but requiring completely difference approaches, expectations, encouragement and "indicators of success".

Some of this is about me, but some of this is about a place's "culture of neighborliness". I don't think it's about how friendly people are or what people want in their hearts. I know that the people here in my Texas town are some of the friendliest, warmest people I've ever met. I think it's more about how things work, how people regard the idea of "neighborhood" and how things have been done in the past. So as grassroots grantmakers, when we are making those small grants that promote neighborliness, we may be actually sowing seeds of some pretty significant change. We may be adding "neighborliness" to the water and creating neighborhood as a social or politcal unit - and making it easier for people like me to walk across the street and knock on the door.

What do you think? Is this just about me and my quirkiness, or does neighborhood culture make a difference?