An Invitation, Not a Destination 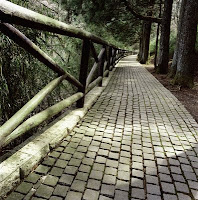 Have you ever been thinking about something, feeling an itch to try something or tackle something, and something or someone appeared that eased you from the path of "just thinking" to the path of doing? That's how new things generally start with me.

My active citizen journey began with a knock on my door from a neighbor. It took a new turn when an elderly woman down the street took me under her wing and connected me to an amazing network of local activists who came together to save our neighborhood from an interstate highway project. It took yet another turn when I accepted my neighbor's offer to give me a ride to the annual meeting of our neighborhood group - where I was asked to help hand out materials and later to help with a project and even later to serve as president of the group.

I've begun to think that one of the most powerful "tools" of grassroots grantmaking is the "invitation" aspect inherent in the small grants programs. The notice that small grants are available and accessible to people who are not experienced grant seekers and are not associated with sophisticated non-profit groups is like my neighbor's knock on my door. Some people may not open the door. But others - those who have an idea or an "itch" that would move them from spectator to active citizen - may hear the knock and open the door. And, by opening the door, they begin a journey that will change them and change their communities.

One of the assumptions associated with grassroots grantmaking is that it requires "patient money" - a consistently available source of funds that is available to continually re-prime the active citizen pump at the block level. Isn't the power of patient money really the power of the invitation? If no one in a community hears the invitation this time, there will be another opportunity. If life gets too busy or complicated to answer the invitation this time, there will be another opportunity. If the "itch" isn't strong enough this time to make the effort to respond this time worth the effort, there will be another opportunity. And when you have begun your journey into active citizenship, the next invitation may take you around the bend in the path and deeper into your own and your community's journey toward the community that you envision.

When I think about an invitation, I think about something that is enticing, exciting, and full of possibilities. I think about a warm reception and a feeling of hospitality. When I think about some of the best small grants programs in the grassroots grantmaking world, I think about funders who have managed to bring these qualities into the grant process.
I would love to hear how the concept of "the invitation" resonates with you and your work to support active citizenship, and what you are doing to make your work more powerfully inviting. A comment here is a great way to share. You're invited!