Recommended Reading! "One" on Civic Citizens 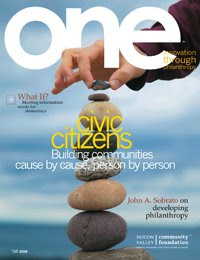 The Silicon Valley Community Foundation's publication, One, was in my mailbox today, and I was delighted when I saw the cover story - Civic Citizens: Building Communities Cause by Cause, Person by Person. Even more delighted when I turned to the article and read the lead-in:
Impassioned people change their communities, and community involvement changes people. Call it the hopeful cycle of public progress.

The article tells the story of regular people, "unlikely advocates", who stepped forward or were drawn into public stages and found their public voice. The article notes that "engaged citizens develop the knowledge, skills, values and motivation needed to promote better quality of life in a community." Voila! The perfect description of the power of grassroots grantmaking! Grassroots grantmakers - at the most basic level - use small grants as an invitation to regular people to turn off the television, get off the couch, connect with their neighbor, and move an idea or a dream into action. And central to grassroots grantmakers' theory of change is the change that occurs in people - and in communities - when people accept that invitation.

This article includes lots of wonderful nuggets - about engaging donors, the power of deliberation, the importance of social capital, info on advocacy and lobbying - but I especially loved the attention that the article gives to regular people who have been involved with PACT, San Jose's PICO (Pacific Institute for Community Organization) affiliate, and a Silicon Valley Community Foundation grantee. I loved reading about Adrian Cerda, an electronic engineer who joined PACT - and that Cerda says that his involvement with PACT has helped him be a better a citizen, a better employee and a better leader. And Elizabeth Alvarez, who says that involvement with PACT has taught her that the more civic engagement she sees in a community, the better the quality of life in that neighborhood. And Philip Crosby, a retired scientist who says that civic engagement has redefined his understanding of his faith and behavior. Amazing stories - so much like other stories I've heard from people who are doing "civic engagement at the block level" type of work, but stories that don't often end up as cover stories of publications.

Kudos to the Silicon Valley Community Foundation for shining a light on the power of regular people in this article!
No comments:

Is This Dream Too Big? 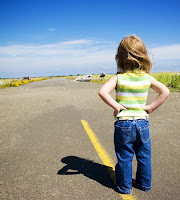 It's now less than two weeks until the election. I'm tuned in - in every way possible - to what's going on, simultaneously worried and excited about what might happen on election day.

Oh, and then there's what's happening with the economy, with a new twist every day. And wondering how this will affect grassroots grantmaking - if funding for civic engagement at the block level will be pushed to the back burner as funders grapple with the realities of this crisis.

For me, this feels like the news obsession I experienced after 9-11 and Katrina. A day to day, what's happening now obsession. For me, it's hard to think about next spring or a year from now.

So this was my mindset when I trekked up the highway to Austin for a day at this year's national conference of a group that is new to me - the National Congress for Dialogue and Deliberation (NCDD). NCDD has been around since 2002 and this was their fourth national conference. I discovered NCDD through Matt Leighninger and the Deliberative Democracy Consortium - began following them by joining their Facebook group. When I saw that their national conference would be within easy driving distance, I decided to make the drive and spend a day "in the water" withe NCDD community.

I loved being in that water with 400 other people from quite varied backgrounds who actively practice, promote and study inclusive, high quality conversations - who seek to nurture justice, innovation and democracy throughout society through the widespread use of transformational communication methods like dialogue and deliberation - who believe that elevating the quality of thinking and communication in organizations and among citizens is key to solving humanity’s most pressing problems (not my words - but words from NCDD's website that fit well with the group I found there).

So it was with some hyper-focus that I sat listening in one session as Carolyn Lukenmeyer, President of AmericaSpeaks, talked about this special moment in time when people are not only paying more attention but seem hungry to reclaim their citizen voice.

Carolyn laid out some "what if" scenarios - "what if", for example, new leadership at the national level turned to citizens as co-developers of solutions to major problems such as access to affordable health care? What if we don't have the capacity or know-how to capitalize on this moment in time and work in a way that has citizens at the center? What if this hunger for being part of the solution that so many more people now seem to be expressing is not addressed?

Carolyn's approached these "what if" questions with a sense of possibility. She pointed to all the resources that are waiting in the wings for a large-scale effort to engage citizens as problem-solvers on something as important as health care, including thousands of experienced facilitators, public libraries who are perfectly positioned to provide access to information needed to inform this process, community colleges who are poised to provide the space needed for community dialogue, and pioneering work and research on the use of technology and new media for public dialogue.

On my drive home from Austin and in the days since then, here is the dream that I've been hatching:

There will be funders (hopefully many funders, hopefully the community of funders that we call grassroots grantmakers) who seize this remarkable moment and do something to answer the call. The call may come from our new president - or not. If not, the call is already coming from the millions of citizens who have stepped forward at this time to say in one way or another that they care, they believe in democracy, and they want to move from the couch to the active citizenship role.

There will be funders who see the down-turn in the stock market as even more reason to get serious about mobilizing the largely untapped energy and resourcefullness of everyday people to address everyday issues. And to realize how important it is to think big about small grants.

Is this dream too big? What do you think?