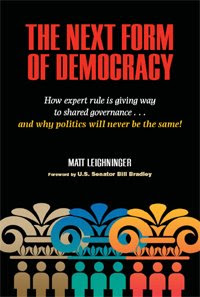 Matt Leighninger. author of The Next Form of Democracy: How Expert Rule is Giving Way to Shared Governance and executive director of the Deliberative Democracy Consortium, was Grassroots Grantmakers' guest this week for a topical conference call.

Matt talked about a shift in the citizen-government relationship that he feels is impacting just about every field and inspiring new attempts to make local democracy work. He attributes this shift to changes in both citizens and public officials. Citizens are more skeptical, more informed, more pressed for time, and more wired into information than ever before. Public officials have fewer resources and less trust from the public. They are also tired of being in conflict with citizens and less able to hide behind jargon.

As Matt talked about the notion that the relationship between local government and citizens is shifting from parent-child to adult-adult, and how both local governments and citizens are adjusting to that shift, I began to think of the implications for grassroots grantmaking. And there are indeed implications, as suggested by the quick poll that we took of the participants in our topical call. When asked if local democracy is changing in their communities, 80% said yes. And, when asked how central local democracy is to their work in the grassroots grantmaking arena, 80% said that it is "front and center".

As I thought about this, I couldn't help but flash back to my early days as a grantmaker - managing a new grassroots grantmaking program for the Community Foundation in Memphis - only a couple of years before Matt began his work with the Study Circles Resource Center (now Everyday Democracy) that led to his book. As I listened to Matt, I realized that I too have had the opportunity to witness this change, but had not, until this week's conversation, thought much about grassroots grantmaking "then" and grassroots grantmaking "now".

Our strategy was to find baby associations or people who wanted to form associations, help them get stronger through grants and technical assistance, encourage them to keep going by acknowledging their success and offering another grant, and position them for bigger grants from other local funders. Bigger grants over time = stronger associations = better representation of the neighborhood at the big tables where decisions are made that affect people's lives.

Maybe it's experience with calcified neighborhood associations or simply because of the amount of change that we are now seeing at the community level, but funders who are engaged in grassroots grantmaking are thinking beyond neighborhood associations.
It seems to me that the common thread that runs through the grassroots grantmaking that I see today has a much more adult-adult feel than the grassroots grantmaking of the past. More about everyone as a leader than anointing the naturally gifted leaders. More about making room at the table than identifying who should sit at the head of the table. More about being open to a wider array of possibilities of how people find their way to active citizenship and change making.

Thanks, Matt, for being with us. Looking forward to continuing the dialogue!
No comments: Links to this post