Community is a Verb 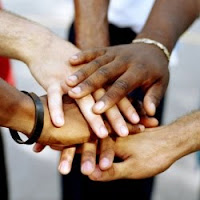 Mike Blockstein, Principal with Public Matters, a consulting firm that generates innovative, artistic, place-based projects that build civic and social capital in communities, was Grassroots Grantmakers' special guest this week for one of our monthly topical conference calls - this one on neighborhood narratives.

As Mike was talking about the role that neighborhood narratives play in building community, he shared something that rang a gigantic bell for me as an essential truth of grassroots grantmaking:

community is a verb

What is tricky about grassroots grantmaking is that resources that are invested in community building actually do produce "things" - newsletters, festivals, after-school activities, gardens - and it's easy to focus on those things. When that happens, however, we're missing the point. The point is that community is a verb. It's what's involved in the doing that's the point - that builds people to people connections in a community, creates the opportunity for people to discover and use their gifts, and helps people assume their role as active citizens.

As we've learned more about the strategy of grassroots grantmaking, we've become more and more convinced by the power of the beginning grants - those grants that invite people to join a neighbor and move an idea to action. It is here - with grants as invitations that inspire people to move from wishing to doing - that community building becomes a verb.

I can think back to times in my life when I had been sitting on the sidelines, not even sure that I wanted to get in the game and definitely afraid that I would not measure up. But then I was invited in or had the courage to invite myself - and found myself transformed by what followed. And how situations change - often in wonderful, surprising ways - when new people join a group in situations where there is freedom for people to contribute instead of the expectation that people fit in. My hunch is that we have all had those experiences.

So isn't it curious that when we step into our professional roles as the high-achieving people that we are, we often take the "verb-ness" out of community building opportunities that our resources help create because we are trying so hard to guarantee results?

I'd love to know what you think about the notion of community as a verb. Comments are welcome and easy to post.....so this is your invitation to jump right in!